On Saturday 27th of February, the Rowing Club traveled to Saltford in Somerset for Avon County Rowing Clubs Spring Head Race. Four crews entered, a pair, two doubles and a coxed quad, all racing in the long course, 3300m. A head race is a time trial against other boats, where boats are set off periodically to try and be the fastest on the course. Good steering and overtaking, amongst other skills, are required to be successful.

The first boat out from UoG was the men’s double scull. A new crew formed by Jack Heaver and Daniel Watt, sitting at bow and stroke respectfully. The boat set a great time of 13 minutes 14 seconds – the fastest in their category for the day by 36 seconds, securing them a medal. The next boat to complete the race was the men’s pair, a sweep boat made up of Captain Alex Burnett and Marcus Barker. Unopposed the boat set an excellent time of 12 minutes 50 seconds, the fastest Gloucester boat of the day, overtaking two masters rowers in front. The final boat in the early division was the women’s double made up of Oonagh McNair and Zoe Williamson, A.K.A Crew Zoonagh. The girls gave a great performance, even with a seat coming off towards the end of the race. They completed the distance is 14 minutes 36 seconds, making them the fastest in their category by 13 seconds, securing a medal along the way.

The women’s coxed quad, formed of Harriet Jones, Olivia Cole, Abbie Whiddett & Vice Captain Amy Dillon with Captain Alex stepping in as Cox completed the race in 15 minutes and 5 seconds. The crew performed extremely well for their first competition on the water. Although the result wasn’t what they wanted, it did not reflect the hard work and effort put in by all crew members.

We would like to thank Avon County for hosting such a well-organized event, which we will certainly be returning to in the future. Also thank you to Gloucester Rowing Club for their continued support, allowing us the use of their boats, oars, and trailer. 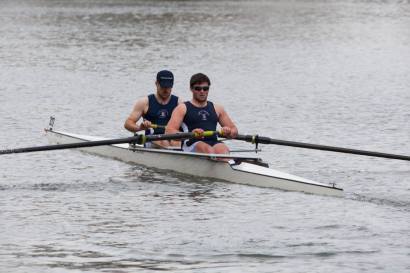 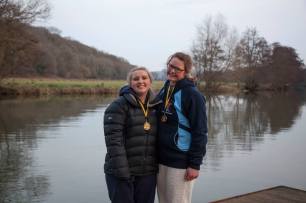 We will be in the Oxstalls link corridor as part of the New Years Fayre, tomorrow between 10am & 4pm! Come and pay us a visits, we’ll be happy to chat and answer any questions 🚣🏼🚣🏼
Welcome back to uni everyone 💙 What better way to start the year than coming to Yates on Monday 27th to test your knowledge at our quiz night! We hope to see you all there.
We hope everyone’s had a lovely Christmas holidays and wish you all a very Happy New Year! 🥂 • Read up about the amazing semester we’ve had in our end of year round up⬇️⬇️ https://glosunirowing.com/2019/12/31/semester-1-round-up/ or find our website in our bio
#BRIC19 it’s been a treat🥉 Well done to our club for getting multiple PBs yesterday and to @daniel.gillett.560 for getting a bronze medal in the U23 Lightweight Men’s 2k!
Christmassy evening at Gloucester Quays ice rink followed by mulled wine and mince pies🍷
Our CC collecting her ‘Rower of the Year’ award for her home club @castledorerc this weekend 🏆