The club took the small journey up the road to Evesham Rowing club for a weekend of racing – and the aim of getting some of the crews some regatta racing experience.

The first boats out were our women’s novice doubles: Crew Chariet and Zoonagh. Whilst the crews put in a great effort for their first 1000m side by side race, they were beaten by their opposition and didn’t progress further in the day. 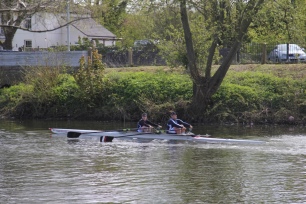 The next boat out was the men’s novice double: Dan and Heaver (nickname to be decided), were given a by into the final for the category after their first round boat failed to show. The race started off close, with the crew just ahead by a canvas, however the lads put in a big push to extend their lead, and won with the final verdict being “Easy”. This meant that the crew won their first sculling points on their license, progressing them to the intermediate 3 category.

It was then the turn of our women’s novice single, Florence Stevenson, dubbed “Loner Boat”. Whilst she didn’t get the result she wanted after not progressing to the next round, the experience gained had only driven her to improve as she prepares for her next race. 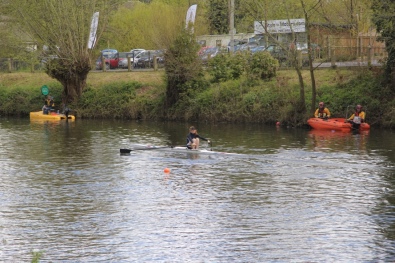 The final boat of the day was the men’s IM3 pair formed of Captain Alex and Marcus. Again, given a by into the final due to the first round opposition not showing, the crew had a good start. The crew extended the lead as the course progressed finishing two lengths ahead of the opposition. The crew picked up a couple of rowing points on the licence, and some things to go away and improve on to make the boat that bit faster.

Thus, ended a successful day for the club, picking up two points, the first of the year for the club.

Sunday – where do we start… it was an eventful day. With a change of course from 1000 m to 500 m. First boat out was Florence in the women’s novice single. Another great effort put in by Florence as she went up against a tough opponent from Ross rowing. It was closer than the Saturday, but she missed out on progressing further.

Straight to the next race, and after their success on Saturday the men’s double were no longer allowed to row in the novice category – so they decided to go their separate ways and compete against each other in mixed doubles. In one boat Heaver and Florence, in the other, Dan and Zoe. Both crews were off to a great start, but Dan’s Capsize curse crept back, and the crew went for a swim on their fifth stroke after catching a crab – needless to say Heaver and Florence pulled away and won the race. Dan and Zoe on the other hand, made friends with the rescue boat.

Not letting the capsize phase her, Zoe was back in the next division racing with her partner Oonagh. Alongside, Crew Chariet, and new to racing, Kim and Anna, and Alice and Connie. Whilst everyone put in great effort, the experience of the other crews helped them to win over the UoG Crews. But with some things to go away with, the crews will be back at it again for some more racing!

The final crew of the day was our IM2. women’s double formed of Vice Captain Amy Dillon, and Julia Rogers. The girls had to win over the double from the regatta hosts Evesham for a chance in the final. Straight from the start UoG pulled away and gained a convincing lead over their opposition, finishing the race by several boat lengths, and securing their place in the final. The final was against Ross Rowing, and despite our crews best efforts, a caught oar at the start of the race gave the opposition just that small lead over the UoG boat, losing but just a canvas.

So ended a weekend of racing. All crews gained the experienced they need to advance further and make sure to have success at the next race!

We would like to thank Evesham Rowing Club for making many of the club’s first regatta an enjoyable experience, we’ll certainly be back again! Further thanks to Gloucester Rowing Club for the continued support allowing us use of the boats for the whole weekend!