On Saturday the 14th May, the rowing club had a small entry into the Bristol Avon Regatta at Saltford. The distance was 1000m, with four boats in three categories, a W.Nov 1x, two W.Nov 2x’s and a Nov 2x.

The first boat of the day was Florence Stevenson in the women’s Novice Single Sculls against a boat from Monkton. After a quick start and gaining a considerable lead over her opposition, Florence won her semi-final with a verdict of “Easily”. It wasn’t long before she returned to the water for the final, again, against another boat from Monkton. Another great race start from the Gloucestershire single saw Florence take a strong lead which further increased as the course progressed. A final verdict of “Easily” secured Florence the win of the category, with a metal tankard and a point on her license as her prize. With the new point, Florence has lost her Novice status and has moved to IM3.

The next crew to race was the women’s novice double, Char and Harriet competing against Bristol University Alumni. After a delayed start due to Bristol Alumni failing to boat on time… the race was off to a great start with the Gloucestershire crew demonstrating power through the first 100m having a slight advantage over Bristol. However, Bristol fought back through the closing distance of the race pulling back the gap and winning the race with a final verdict of “easily”.

The next boat of the day was Amy and Zoe, again in the women’s novice double, racing against Pangbourne. A strong start for the Gloucestershire double saw them gain a considerable lead over their opposition, which they maintained for the duration of the 1000m course, winning the semi-final with a verdict of “Easily”. A short turn around and the women returned to the water for the final against Bristol University Alumni. Another quick start from Gloucestershire saw them take a lead over the Bristol double.  By 750m Amy and Zoe were three lengths clear, winning the race and the category comfortably. Some metal tankards, and what could be considered the largest novice trophy we’ve ever seen means the women move out of the novice category and into IM3.

The final boat of the day was the men’s novice double formed of Marcus Barker and Luke Packham. This was the first event in which the crew had raced together. Their race was equally matched Taunton crew. After a slight crab caught by Luke, the Taunton boat managed to gain an advantage over the Gloucestershire crew, who unfortunately lost with the final verdict of three lengths.

A well-organised event and awesome weather for the day made it a great regatta experience for all the crews racing. Thank you to Avon County Rowing club for hosting such a great regatta. Winning two out of three categories isn’t bad for a day of racing!

We’d also like to thank Gloucester Rowing Club for the use of the boats and our friends at Hartpury Rowing for sharing and towing the trailer. Congratulations also to Hartpury and Gloucester Masters on your successful races – great events to watch!

Florence in her single 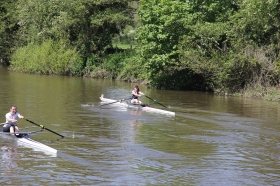 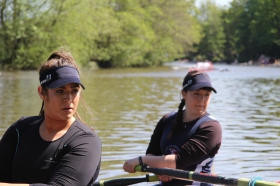 Zoe & Amy With the trophy

Florence and her pot